It’s called Lordstown, the only place in the world with that name, and they’re living on a wing and a prayer. This forsaken, rural town just 30 miles northeast of Youngstown has gone through tough times before, but never as devastating as this one. After all, this charming Ohio town used to be the treasured gem of General Motors

In the 1960s, when the Chevy was the poster car of America, GM executives envisioned a long and illustrious future here, laying roots in the farmlands of northeastern Ohio. The first car that rolled off the Lordstown GM plant was a Chevy Impala over 50 years ago.

Over the years from 1966 to 2019, the Lordstown and GM was booming, producing 23 types of cars such as the infamous Vega and Chevrolet Cavalier. Over the years, the plant expanded and workers moved here in droves.

The plant, rolled out thousands of cars per week taking a huge physical and psychological toll on their workers. Workers were treated like a piece of meat leading many to surreptitiously sabotage the vehicles – a assembly plant rebellion dubbed the Lordstown Syndrome had taken place. Thankfully, GM fixed their morale problems incorporating their employees as part of the solution. United Auto Workers did their part ensuring plant employees were paid well.

The pinnacle was 2010 when GM selected Lordstown as the location to produce the compact and fuel-efficient Chevy Cruze. Over the years as gas prices stayed affordable sales of trucks and SUVs soared while sedans sagged.

Sadly, 9 years later, this March, the Lordstown plant closed putting several thousand employees out of work, many having to relocate to other GM plants in other states to save their pension. During its peak, Lordstown employed 4,500 workers and scheduled three shifts. GM now wants to focus on electric vehicles. CEO Mary Barra is betting their future on electric vehicles hoping to sell a million a year, but sadly not in Lordstown.

A heartbreaking day in Lordstown, as the last Cruze rolls off the line today.

These workers are the heart and soul of GM. I stand with them and their families, and I’ll continue to fight with them to save this plant and their jobs. 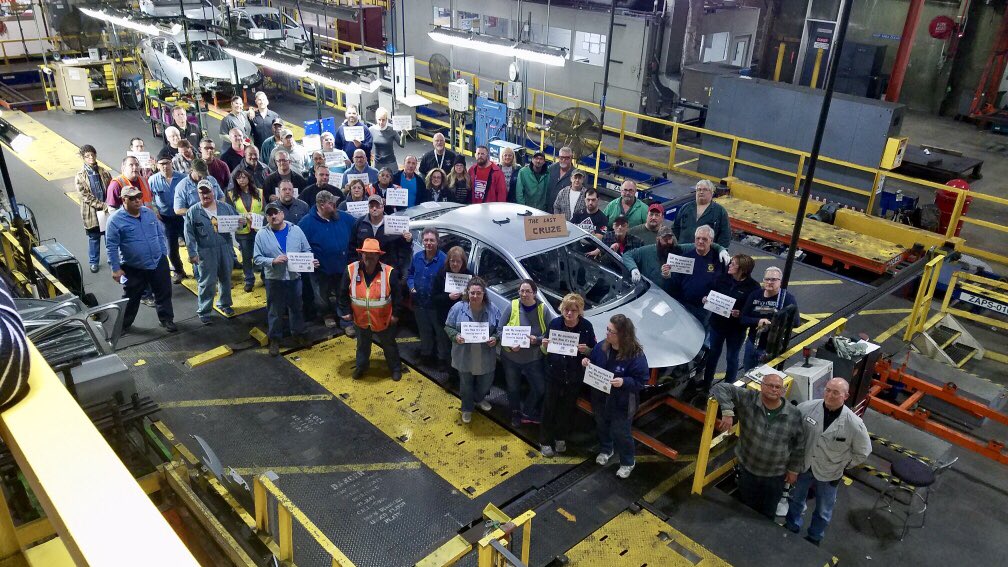 403 people are talking about this

“The GM closing has been devastating to Lordstown and our family,” said Melissa, a cook at Ross’ Pub and Eatery. “We used to be packed for lunch and at night servicing late night shifts. Now we’re mostly quiet. Thank God for our regulars.”

“I’m very sorry to hear this.”

“We’re surviving and we get a lot of press. Beto O’Rourke was just at the plant today. UAW told him that they did everything GM asked for they still bailed out.”

“Yeah and we haven’t forgotten that it was the government on the taxpayers dime who bailed out GM 10 years ago – and now they have left us high and dry.” added Courtney the very busy bartender as she hung up a order on the ticket tab.

President Trump visited in March rallying hard against the closure.

GREAT NEWS FOR OHIO! Just spoke to Mary Barra, CEO of General Motors, who informed me that, subject to a UAW agreement etc., GM will be selling their beautiful Lordstown Plant to Workhorse, where they plan to build Electric Trucks. GM will also be spending $700,000,000 in Ohio…

32.6K people are talking about this

But first the United Auto Workers have to approve this plan and even if it flies, Workhouse does not plan to employ nearly as many people as GM. Auto workers voted Trump into office in 2016 and Ohio remains a crucial swing state in 2020.

“We’re still holding on to a hope and a prayer with GM. Lately they offered to build electric batteries here. But there was a catch – a big one.”

I listened intently. “And”

“GM wanted to slash wages from $30/hour to $17. That’s what they pay plant workers in Mexico.”

It’s a local watering hole that caters to a steady group of regulars that keep this place above water. It’s called Ross’ Pub and Eatery

Sadly Ross’ still opens at the crack of dawn and stays open for the 3rd shift that has long gone.

With a dining room, liquor store, pub and outdoor patio – it’s spacious and in the past crowded. Like many places in Ohio, there’s truck parking in the back. But even the truckers are gone. Earlier this year, Youngstown trucking company, Falcon Transport abruptly closed, stranding hundreds of drivers on the road. Falcon serviced GM including its Lordstown plant.

There’s a great selection of beer written in a chalk board behind the bar from quintessential Midwestern breweries such as the Great Lakes Brewing Company.

The bartender, Courtney, keeps her head up despite the turndown and drastic loss in sales. Tonight she’ll be lucky to clear $150 and she’s staying open till 2 am.

George Strait is blasting from the juke box and the few locals are watching the Indians play, keeping their slim hope alive to making the wildcard.

I sit at the bar downing a Great Lakes Holy Moses next to a man in his early 50s who works as an EMT Fireman who smiles approvingly.

“Oh yeah, back in the day, it would be busy right about now.”

“I hear you, this is really sad,” I looked down despondently.

“Honestly, I don’t feel too bad for them. Many assembly plant workers were getting $30 an hour for doing menial labor. If they were smart, they could have put their money away or invested it.”

“You’re kidding, that’s great pay for tightening up a bolt with a power tool.”

“And a single bolt may have to be tightened up by five different people. Shit gets monotonous. That’s why people drank before work and even drank on the job. Sometimes the place reeked of liquor.”

Shaking my head. “So I was reading about this Lordstown Syndrome.”

“Oh yeah, GM treated their workers like a piece of meat and assigned a meaningless number. Cars rolled off the plant constantly and hours were so brutal, employees were cutting wires, slashing seats, hiding foreign objects and engines and gas tanks.”

“Holy Moly, did any of these cars make it off the plant?”

“I certainly hope not. But this was the time of the Vega which was an accident waiting to happen and a huge disaster for GM.”

As we engaged in deeper conversation, a couple of late nighters kept their tab going. Despite the late hours, no-one was complaining. The bar was just happy to get clientele.

Why not, there’s not much to live for nowadays. Many have lost their jobs so they no longer have to rise early in the morning for the early shift. They can just drink the night away and stumble home and sleep in.

I gave a look of pleasure as I devoured my rodeo burger and mac and cheese with bacon and tomato. I’m staying late, I’m not going anywhere – see the big rig parked in the gravel lot in the back. That’s where I’ll stumble home to after my Great Lakes and Long Island Ice Teas and a nice, long chat with my new friend at the bar.