JD Davis was just fuming after his boss let him go. He stayed on the road for weeks on end, never refusing a dispatch even to gritty NYC.  He had complained about the Big Apple drivers are arrogant and insidious.

But when his truck kept on breaking down, often with a faulty emissions system, he got frustrated. First it was the DPF getting clogged causing his engine to derate – a dangerous situation while navigating through a mountain pass in the west.  The heavier the load, the steeper the climb, the faster he would lose precious horsepower.

Then the EGR cooler went bad leaking coolant into the combustion chamber. The truck was in the shop for three weeks straight and the they had to remove and clean out the engine, an expensive and time-consuming procedure.

After getting the entire exhaust system replaced, it seemed like he was finally home free. Lo and behold the truck broke down again.

Roadside assistance was too busy to respond and a sweltering heat wave made it unbearable to stay with the truck. The APU was broken and there was no way to stay cool. So he simply called a friend for a ride, leaving the broken down semi abandoned on the side of the road. The truck would not stay there for long and within a couple of days was towed and impounded.

There are a few things worse than abandoning a truck. If you abandon a truck, you abandon your future in trucking.  It’s the same warrior ethos: “leave no one behind.”

This led to a nasty call from his boss who told him that he would no longer be driving for the company.

JD was irate at his boss for letting him go. He had worked for a long time for his company and made huge sacrifices. Because he had left it broken down on the side of the road and it got impounded.

“F*ck that! If I can’t drive this truck, than no one else can.” he barked as he hung up the phone.

JD poured the entire five gallon can of diesel inside the cab. Then he lit a match and set the cab on fire. He rushed to the getaway car without even looking back. He could feel the heat and smell the fumes.

When he got on the interstate, he could hear the sound of sirens heading towards the travel center. By the time they put out the fire, he would be in bed and soundly asleep.

Seven fire trucks from Alberta and Brunswick County, Virginia responded and were able to put out the fire within thirty minutes.

The flames was so intense, onlookers could not tell whether anyone was inside the truck.

Eyewitness reported seeing a male figure approach the truck shortly before it caught on fire.

The fire was contained to the cab, but a dry van trailer parked next to the truck received significant fire damage.

“Is someone in the cab?” another trucker asked the fire fighter?

“This is one reason why we need smoke detectors,” added another.

Not just a smoke detector, but a carbon monoxide detector also.

There were several small explosions that sent debris flying through the air.  About 20 trucks were parked in the truck stop, but none directly adjacent to the explosion. No injuries were reported. 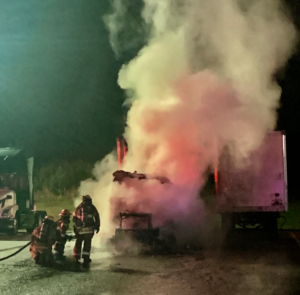 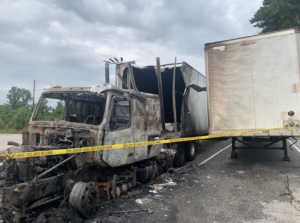