Destiny Childs was breaking the mold.  She was only 12 when her father left to grab some smokes at Mondawmin Mall and never came back. Maybe he never abandoned his wife and kids after all. Maybe he got robbed at gunpoint, shot when  he tried to fight back, and his body disposed in the inner harbor, a dumping ground for criminals, the forgotten and the damned.

The family struggled to pay rent and moved from one low-income housing to another. Her brother was arrested for looting a CVS store after the death of Freddie Gray. Last year, she moved in with her fiance, and the future was looking bright until he got locked up for drug trafficking.

Last year, Destiny broke the glass ceiling and became a certified truck driver, but then a terrible wreck set her back.  The DOT piss test found traces of marijuana in her system as well as meth and alcohol – that was the end of her driving days.

Thankfully, she survived with no criminal charges.  Now Destiny had enrolled in the Diesel Tech program at the North American Trade Schools fighting for a second chance.

And she showed up with the right attitude.  Hard working, determined, attentive  But after the first few months,  she started to go downhill. She would be absent from school, wouldn’t do her homework and would bomb tests, hoping to prove her worth in the shop. But probably her worst trait was her inclination to boss fellow students around like they were her inferiors.

“Ok let’s do a clutch adjustment,” said Mr. Hyde.  The first thing we do is check the free play. Stepping on the clutch pedal – we should aim for about 2 inches of free play – the distance the clutch moves before it starts to engage.

This wasn’t no tire change.  Replacing a clutch and even repairing one required a lot of skill and finesse.  There was no brawn here unless you’re lifting a clutch onto the transmission.

“Ok, Chito go under the truck and put the feeler gauge in between the release bearing and clutch brake. Biggie go up to the cab and step on the clutch all the way down. Then Chito tell us if the gauge clamps down.  If it doesn’t Richard get ready to  adjust the linkage.”

“And whatever you do, don’t turn the ignition – we don’t want anyone losing fingers today.”

And diesel tech has its fair share of hazards. In the back, a tight band of metallurgists were practicing TIG welding releasing a thick plume of gas and fumes saturating the morning air. In the front a forklift was moving a transmission around like it was a stack of cardboard. 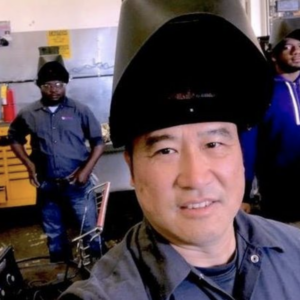 This is the reason why Mr. Pontzer taught us 10 hours of OSHA so we would  be familiar with all the inherent hazards in the shop and get our certifications to show our next employer that we were shrewd and safe.

Last month Jude was hoisting the fifth wheel off a Volvo frame when the load got free, swung around and crushed him on the forehead like a linebacker on a wideout.  Needless to save, the instructor gave him the day off, but he was back, a full up round the next day.   To this day, the deep gash on Jude’s forehead is a good reminder of Jude taking a bullet for the rest of the class.

And in the name of safety, Destiny loved to boss the two of us around like she knew more than we did.  We were all equals and we all should assist and help rather than instruct and demand. And it really got to her head like she was our superior.

“Listen, I’ve been in the military. I know what it feels to be bossed around, and it’s usually by a someone, unlike you, who knows what he’s talking about,”  I announced.

“Well get used to it.  Think this is bad now. Wait till we hire more women.”

“Ok Nappy,  whatever you say.”

“Stop making fun of our curls. Can’t help that it’s all messy – that’s the way it is when I wake up in the mornings, and I ain’t go no time to comb it.”

“Well you rock so many different styles,” Richard added. “Sometimes we just don’t what to see next.”

“Yeah, which would it be tomorrow? Braids, weaves or wigs?” I asked. “And will it be neon pink or rockin’ red?”

“Well as you very well know, working under the truck gets my hair all greasy. So I have to change my hairstyles every so often. It’s way easier to change new than to wash clean.”

“Really, it’s a piece of cake for us. We just lather up with body soap and rinse. Just how long can you go without washing your hair?” Richard asked.

“Two weeks,” Destiny replied. “Unless, I’m working under the truck, then it’s a week.”

“Well, I hear that Brazilian hair is strong and healthy, so I guess that’ll be fine,” I added.

We both shrugged our shoulders and rolled our eyes.  Then we returned in anticipation to the task at hand.

On the International Prostar, there was no free play which is the distance of the clutch pedal moves before it engages.  So we each took turns under the truck adjusting the clutch brake.

Destiny got the message to chill out, and she rolled over to bother the next class who were working on changing out bearings and seals.

Diesel Tech wasn’t all hands-on.  We were all assigned a topic to give a 30-minute presentation to the entire class.

As luck would have it, I was assigned to present on Nitrogen Oxide Emissions.

The EPA had claimed that “over the life of every 10,000 trucks without modern emissions systems, up to 1,600 Americans would die prematurely, and thousands more would suffer a variety of ailments including bronchitis and heart attacks, particularly in cities with air pollution associated with diesel-powered trains, ships and power plants.”

The trucking industry has long argued that the emissions burdens placed on them by the EPA are a major financial hardship.

The International trucks with the inadequately designed Maxxforce engines are notorious for putting out too much Nitrous Oxide.

In response to the 2010 EPA restrictions, all other truck manufacturers created an SCR (Selected Catalytic Reducer) to remove the soot.  Diesel Emission Fluid (DEF) was added into the SCR to convert Nitrogen Oxide into Nitrogen which was easily removed via the tail pipe without creating soot.

But for Navistar International, the engineers created an advanced EGR which sends emissions back into the engine.  The emissions reduces the amount of Nitrous Oxide that goes through the tail pipe. But in return the fuel efficiency is seriously impacted. And there are potential setbacks.  The EGR tends to fail and leaks coolant into the engine causing a shutdown.

Then the DPF gets clogged with soot to the point that the truck is no longer operable, and you have to do a forced regen.

This can be a huge pain the ass. And eventually it happens so frequently that you have to get your DPF and DOC cleaned – a process called baking.

It was opportune that I presented on Noxious Diesel Emissions because purchasing an International Prostar, I would become intimately familiar with this issue.  In fact, this was the main reason why I purchased the truck – it got a lot of bad rap with truckers and negative media coverage.  Navistar had to get rid of the trucks, and  I purchased one at a deep discount price.

Jada was a friend who ran a custom T-Shirt printing kiosk in the Mall. She had skills as a graphic designer and could custom print a shirt for $20 a pop.  People liked the idea that they could get their photograph on a shirt. With a cotton T-Shirt costing  $3, she could easily bring in $50 per hour.  The rent in the mall was fairly cheap, so it was good money on days that she was busy.

She had never been to DC, so I took her down for the weekend.  She  enjoyed visiting the Mall and hanging out on base.  She learned a lot and was happy to get out of Baltimore County.

Jada also also got to see my truck, and loved the interior trim.  She got to ride on it several times, and I even let her steer.

I parked the truck at Security Square Mall and lived in it while attending school.  It was a great treat and very convenient. I needed to practice my shifting and would  drive around the mall several times a week, taking other students with me to practice.

Didn’t have to commute and it was way better than sleeping in the hot car. 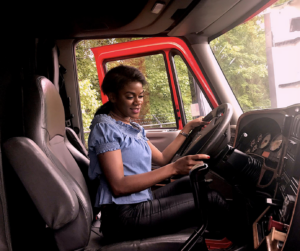 On warm days, I would hike down to the Patapsco Vally State Park and go for a swim.  Sometimes, I would invite adventure seekers  from the construction class, like Cam who  is in the National Guard. It’s a bit hidden, and  you never expect to  see a beautiful oasis down here.  There’s nothing more refreshing than jumping into a natural swimming hole with fresh, spring water. 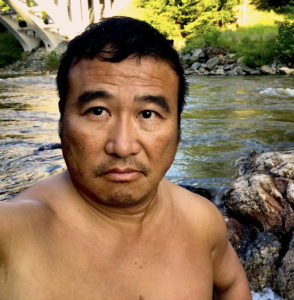