I had delivered my first load to Jacksonville and was relaxing at the beach licking the frosty froth off the top of my root beer float.  Root beer goes great with rum because they both mix well with vanilla ice cream.  After blowing not one, not two, but in fact three tires on the way down here, I deserved some R&R to take the edge off.

Was surprised that I could park for free (on weekdays). It was like having a beach side resort hotel for free and my own private beach at night.

Daybreak was the most inspirational. I would go for a long run on the beach, then a tiring swim interspersed with some exciting body surfing.  Then back to my cab to check on emails and with my tummy grumbling, I just rolled next door to V Pizza where I down a 9 inch deep dish.   Happy hour then started early and by the time trivia started I was already three sheets to the wind. No worries, my cab was just an earshot away and I had the entire beach to feed the planktons when I had to go.

After three days of living like a beach bum, I started to feel a slight pang of guilt. It was time to find a load and sure enough there was one heading from Jacksonville to Savannah which would afford me a visit to see Mom midway. 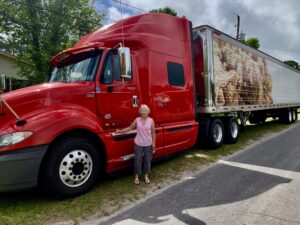 Another reason to book this load was the chance to return back to DC.  I had just left the week before and wasn’t planning to coming back since I had fully turned over the EU Embassy Run to Where to Next Race. But Rachel the organizer said she would be feel more comfortable if I showed up.  After all this was my baby, and I wanted to see the run succeed.

After dropping the trailer in Savannah, I started heading north on 95 wishing I had a backhaul to pay for the fuel.  Luckily, I found a moving trailer that had to be picked up in Fayetteville, NC to be dropped in Woodbridge the next day.  It was perfect and I would be back in DC by Friday morning, enough time to go over the route with the organizers.

So I arrived at Piedmont Van and Storage in Fayetteville to pickup the moving trailer.

I pulled in the yard and parked to pickup the BOL and keys. Then as I started to backup, I noticed a JLG with a couple of people working on the roof of the building.  I definitely wanted to give them a wide berth so I backed up a little bit more than I needed.  I looked at my side view mirrors and noticed a truck parked on my left quarter, but nothing directly behind me.  I stopped just in time then. I swung out to the left and headed out to couple with the moving trailer.

It took awhile to hook-up since I had to back in from the street.  Then I started doing a quick pre-trip.

Suddenly, an employee from Piedmont approached me. I thought he was going to offer some help or suggestions.

“You just hit my truck,” he yelled.

The allegation was so shocking that it was almost laughable.

“No way. I maintained several feet separation. Plus I  would have known if I backed into you – I would have definitely felt it,” I responded. “What makes you think I did that.”

“My brother saw the whole thing. Well let me look at the cameras.”

After over 20 minutes, I looked for the driver, I assumed he was reviewing the video from the dashcam on his truck. I did not notice any damage on his truck. And when he was nowhere in sight, I assumed that he found nothing and there was no longer an issue. Then after speaking with Pullen Moving in Woodbridge it was time to get on the road.

Not a half hour later, I get a call from the broker.

“Did you get into an accident at the pickup?” she asked.

They emailed me a copy of the video from one of the security cameras and once I stopped at Kenly 95, I reviewed it.

I was surprised. Maybe I did hit him.  From the angle and distance I really couldn’t see. It was possible and if I did make contact,  it’s possible that I wouldn’t have felt a thing.

“The bumper is polished aluminum and we found one in Atlanta that can be sent to Smith International in Fayetteville. The cost of the bumper is $ 986.00 which does not include tax, shipping and labor,”said the manager from Piedmont. “Please let me know if you would like to pay and I will get you the complete estimated cost or I can send the information to your insurance company.”

“I didn’t want to settle it under the table. Let the insurance company decide whether I was at fault. Let them be the judge, jury and executioner,” I said decisively, hoping I wouldn’t regret this move.

I delivered the trailer to Woodbridge on Thursday night hoping that everything would be resolved or forgotten.

I looked at the pictures Piedmont sent me of the truck and although the bumper was pushed in a bit, there was no proof that I was responsible for the damage.  It looks bad, but it also looks repairable. 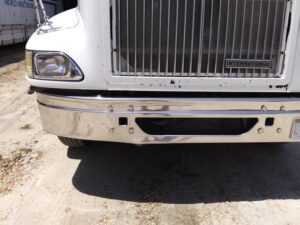 So it was up to Progressive to decide whether or not there was a collision and if so what the claim would be.

Did I do right by saving money, or would this be something that would have major repercussions down the road.

One thought on “Ch 6 – My First Accident”