I hate reefers – when they cut on, it rocks the whole truck like an EF5 tornado. The one night I’m finally resting peacefully at a secluded truck stop,  a fully-loaded reefer with an ancient carrier unit parks next to me.  They’re louder than an ole’ International doing a parked Regen, and the low bass vibrations shake my whole rig to oblivion.

I drove reefers, too. They’re a pig on fuel and I spent too much time getting it pressure washed. Some shippers won’t load you unless you provide a receipt.

I was scheduled to deliver this reefer to Hannaford Supermarket in Esperance, NY. After driving five hours from Harrisburg, PA  I was delighted to be only 15 minutes away where I would be able to shut down for the evening.  At the supermarket, there would be ample supply of fresh food and a place I can rest without this noisy reefer.

A broker had contacted me this morning when I was busy visiting a friend.  He wanted the trailer delivered the same day. I can sense the desperation in his voice. The supermarket’s walk-in cooler had a leaking evap and they needed this reefer delivered ASAP.

Not wanting to disappoint a dependable broker, I quickly replied “Sure, i’ll do it,” but immediately wondered if I was rushing into making a hasty decision. Normally, I plan a load the day before, but I understood that this was an  emergency.

The route seemed pretty straight forward. I-88 – I-7 – State Road 30 – there were no low clearance bridges or overpasses in my route. However, there were numerous hair pinned turns and steep elevation as expected in upstate New York.

When I got off the expressway (88) and onto state road 30, it was only a five mile shot to the supermarket.  I was tasting the fresh deli sandwiches and the freshly-squeezed orange juice already.

Esperance Station Road is a two-lane state road with no median.  Within a mile of my turn, I could see a low overpass that did not have a clearance sign displayed. In the east coast, if there is no sign, you can safely assume that there is 14 feet.  But my GPS stated that it was 12’10”. From my vantage point, It looked too low. But looks can be deceiving, especially on a long road-weary day.

Meanwhile, my Garmin was screaming at me to bear right onto Oak Hill Road (158). My trip planning told me that there were no low overpasses on Esperance Station Road.

But my eyes told me that this didn’t look right. I could get closer, stop the truck an inch away, then measure the height with my load height measuring stick.  But if it was too short, I would have to back down a good distance on this narrow country road.  Didn’t want to hold up traffic. So I followed my trucker’s GPS and my instinct and what at that time seemed like a logical decision.

But that reliable Garmin led me to a steep, windy country road, and I immediately began to dread the obstacle ahead. Around the bend, the road began to zig zag and I was surely losing momentum.

That’s ok, nothing that this Maxxforce can’t handle, I hoped.

My little red engine gathered all the power it could muster, but still faced a difficult time climbing this protracted ridge. All of a sudden, my rig came to a dead halt. Was my clutch slipping? Every time I tried to start the truck on 1st or 2nd gear, it would start to slide back and dangerously roll off the road into the looming ditch.

In order to prevent this from happening, I had to slide into the next lane so now I was blocking traffic from both sides.  But eventually I succumbed to gravity and my trailer slid to the right and clear off the road while my tractor jack knifed to the right.

Oh my, my trailer is stuck in a ditch and in need of a winch.

I googled and contacted the one and only wrecker I could find — A&M Towing in nearby Schoharie, and the driver was intimately familiar with the road.

“This happens every week or two,” the driver said. “Especially with truckers from out of town who don’t know that State Road 30 was recently dug deeper in order to reach the 13’6″ clearance.”

“Geez, it would have been nice if they could have put up a height clearance sign,” I said exasperatedly.

“Yeah, that’s New York for you,” the driver replied. In the background I could hear them smirking.

Since I was blocking both lanes, the wrecker had to come in from the base of Oak Hill Road. Thankfully the trailer was empty so it didn’t long to winch me out.

Luckily, the wrecker got there before the police did and since it was off the beaten path, there was no other traffic except for a motorcyclist who easily stopped and turned around.

So I paid the $600 wrecker bill (always carry cash, you get a better rate) and thankfully no ticket.

Once he got me back on the road, the driver showed me a handy trick.  Lock both the differential and inter-axle on my dash. Then gradually release the brake while still engaging the clutch.  Sure enough, the truck  started to roll up hill like a squirming caterpillar.

Coincidentally, Once I got over Oak Hill Road, I had to get back on state road 30 again and approach the low overpass a second time.  This time the bridge didn’t look any taller. The only difference, the wrecker driver assured  me that it was.  And yes, I made it by a hair.

There was no damage to the trailer with the exception a visible red stain where my right fairing  scraped it when I jack knifed. Of course my right fairing on my cab was bent but that was just cosmetic for all that mattered.  The part was plastic anyway and played a nominal part in the aerodynamics of my truck.  Even the wedge skirt underneath the trailer which had taken a beating in the ditch appeared to be fine.

When I got to the supermarket, I bought some Clorox and heavy duty scotch brite pads and removed the stain as far as the eye can see.  It was hard to reach, so I stood on top of a stack of bakery trays and used a squeegee mop to reach it.

Even though I did the cleaning at Hannaford, the shipper did not notice anything amiss. Obviously, I didn’t need to notify my insurance company.  The damage was minimal and under my deductible.  Would they ever find out?  Perhaps once the trailer was returned to the leasing company in a month, they would find out.  But then again, perhaps my cleaning  was so thorough that they would not.

Here’s the finished product – notice no visible scratch on the trailer. But the dent is visible on my right roof fairing. 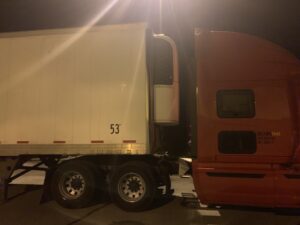 So I learned a BIG lesson that day – do a thorough pre trip and sometimes you can’t trust your GPS.